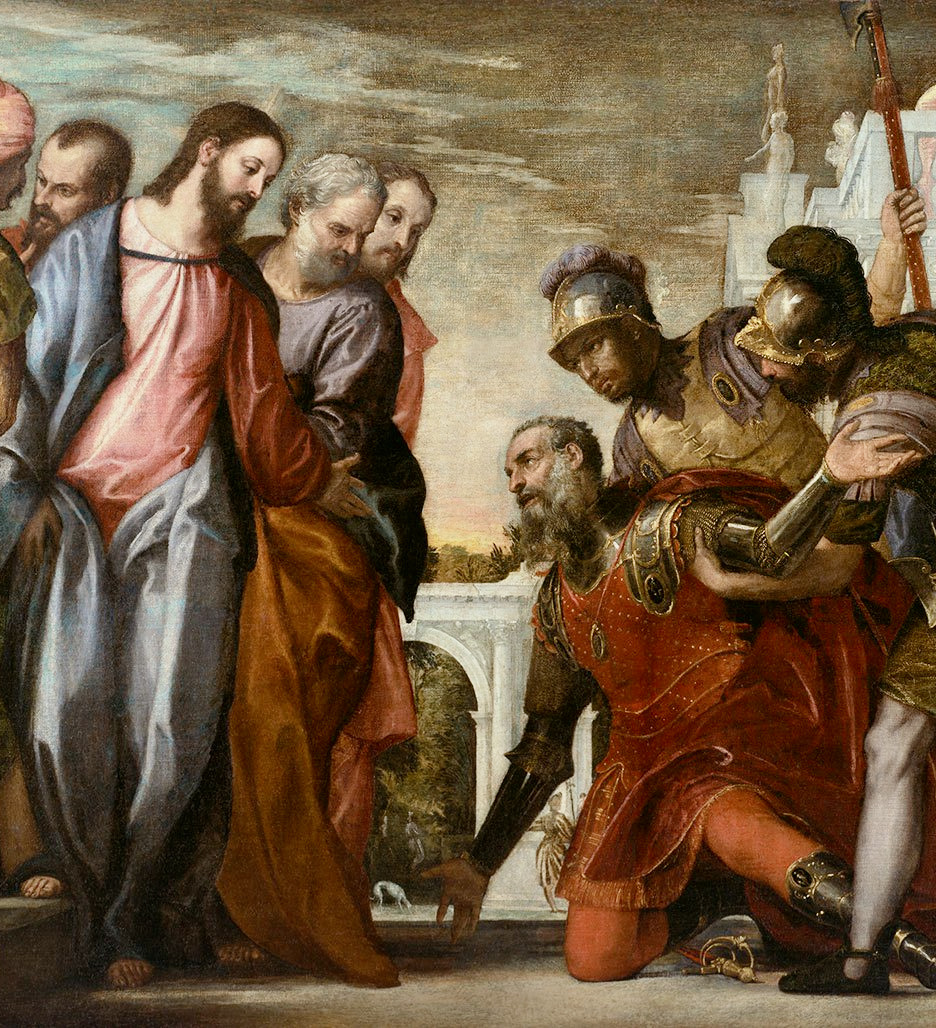 Jesus stretched out his hand and touched him, saying,
“I will; be clean.

Epiphany season is a meditation on Christmas – the unveiling of who Jesus is as he manifests first his Wisdom (as a boy in the Temple) and then his Power in his miracles – last week changing water into wine and today in acts of healing, and next week in a miracle of nature.

Our Gospel today is from Matthew’s Gospel, the beginning of chapter 8.

In Chapters 5-7, just before this, Jesus lays out in the Sermon on the Mount the high ethical demands of the Law of Moses, raising them to a whole new level.  The Sermon lays out a very high calling on us indeed – Jesus says we are to be “perfect even as our heavenly Father is perfect.”! [Mt 5:48]  He is sharing with us the Wisdom of God.

Our Gospel today begins by saying, “When Jesus came down from the mountain…”, in other words, today’s Gospel is the next thing right after his Sermon on the Mount.

In Chapters 8-10, Matthew records 10 miracles of Jesus, one after the other.  It is showing us that though God demands much of us, He is also giving much more, pouring out himself for us to bring healing and restoration and overcoming our fears.  Jesus will make possible by grace, by healing, the perfection that he wants to draw out in us, in the Sermon on the Mount.  [Bruner’s Commentary on Matthew]  Jesus is not only the Wisdom of God but also the Power of God.

In today’s Gospel are the first two of these ten miracles.

In the first a leper came to [Jesus].  A leper is the greatest outsider in Israel – such people were considered unclean, barred from participation in Jewish worship and from social life.  Leviticus [Lev 13:45-46] says,

“The leper who has the disease shall wear torn clothes and let the hair of his head hang loose, and he shall cover his upper lip and cry, ‘Unclean, unclean.’  He shall remain unclean as long as he has the disease; he shall dwell alone in a habitation outside the camp.”

We know a little of the feelings of isolation that the leper might have known from our brief experience with corona virus before we had the vaccines.  And we had a longing for greater human contact.  In our case, we knew a certain solidarity with others because we knew they also could not have contact – but for the leper the experience of isolation would be far deeper knowing that everyone else could still meet.  And the leper was subject to far greater humiliation in appearance also.

Leprosy was a physical disease, but it was associated in the minds of people with punishment for sin.  Think of Miriam, Moses’ sister, who questioned Moses’ exclusive calling by God to lead Israel and was immediately struck by God with leprosy, and had to leave the camp until healed through the intercession of her brother Aaron. [Numbers 12:1f]  Or King Uzziah, who brought in many religious reforms, but later became proud and went into the Temple to offer incense, which only the priests had authority to do, and leprosy broke out on his forehead. [2 Chron 26:16f]  Or Gehazi, the servant of Elisha, who was punished with leprosy for his greed in taking money from Naaman the Syrian, cured of leprosy by God. [2 Kings 5]

But think also of Moses’ miracle that he was to show Israel to prove he was sent by God – to put his hand in his chest and draw it out – it was leprous – then to put his leprous hand back into his chest and draw it out again – it was restored.  [Exodus 4:1,6,7] Is this a figure of God’s work in us – first revealing our sinful heart and then promising to restore it to purity, by cleansing us of sin?  These are the workings of the two Testaments.

In our Gospel, the leper comes to Jesus in humility and with faith –

he knelt before Jesus, saying, “Lord, if you will, you can make me clean.” And Jesus stretched out his hand and touched him, saying, “I will; be clean.”

Jesus is not afraid to touch the man. Under the law of Moses that would have made Jesus unclean.  But with Jesus, purity flows from him to the unclean man, not uncleanness from the leper to him.  And, beyond the outward disease, the longing of this man for human contact, was more than made up for by the physical touch of the Son of God.  Not only body, but heart was healed in this word and gesture.  He knew himself to be beloved.

Jesus then also restores his relations with his community:

See that you say nothing to anyone, but go, show yourself to the priest and offer the gift that Moses commanded, for a proof to them.”

He showed the Jews, as he said in the Sermon on the Mount, that he has not come to abolish but to fulfill the Law.

The second miracle is this:

When Jesus had entered Capernaum, a centurion came forward to him, appealing to him, “Lord, my servant is lying paralyzed at home, suffering terribly.” And Jesus said to him, “I will come and heal him.”

Remember that the Romans were an occupying force in Israel.  They enforced their rule with brutality – they were not loved by the Jewish people.  And yet this Roman soldier, out of love for his servant, seeks out this Jewish teacher, humbling himself before him, and calling him Lord.  Not only is the centurion seen as an enemy, but under the Law he was considered legally unclean – he remained outside the inner life of Judaism.  Gentiles could only worship in the outer courtyard at the Temple, and observant Jews were not to enter the houses of Gentiles or they would need to ritually purify themselves.

Jesus offers immediately to come to the home of the Gentile and heal his servant.  Again, impurity will not flow to Jesus, but purity will flow from him to others.

The Roman centurion seems to know about Jewish custom –

I am not worthy that you should come under my roof, but only say the word, and my servant will be healed.

The centurion shows his respect for Jewish custom, and also says he understands authority – and Jesus surely can just “speak the word” and it will be done.  And Jesus commends his great faith.

We can imagine that the miracle of healing the man’s servant is almost secondary to the message that the disciples and others gathered around are hearing.  The bitterness and deep suspicion in their hearts towards every Roman, is being affected, melted, as they see Jesus responding so generously towards their enemy.  The people gathered would have had their world view shattered.  Jesus says,“I tell you, many will come from east and west and recline at table with Abraham, Isaac and Jacob in the kingdom of heaven.”

In this miracle Jesus demonstrates tangibly his teaching in the Sermon on the Mount:

“You have heard that it was said, ‘You shall love your neighbour and hate your enemy.’  But I say to you, Love your enemies and pray for those who persecute you,  so that you may be sons of your Father who is in heaven.    [Matt 5:43f]

Paul takes up this same teaching in today’s Epistle:

"if your enemy is hungry, feed him; if he is thirsty, give him something to drink; for by so doing you will heap burning coals on his head.” Do not be overcome by evil, but overcome evil with good.

Jesus healing miracles of individuals are a part of the greater picture of breaking down the hostilities, between God and man and between peoples, to bring about a new human community – the Kingdom of heaven.

Just imagine the kind of broken relations between Ukrainians and Russians today, and of what a high call it is to stretch across that brokenness -- of the importance of treating each other’s prisoners with dignity, of the importance of reconciliation in the years to come – showing love, one person at a time.  The loving actions towards an enemy are for the healing of the other and of the one showing the kindness.

And in our own life – is there someone that comes to mind – someone we consider our enemy…  In what way is Jesus calling us to act?  May the Spirit bring this to our mind the next time we meet that person or those people!

Jesus stepped into the divide between God and man because of sin, within the Jewish community because of sin, between Jew and Gentile, between friend and foe, to heal and to offer Himself on the Cross before it was asked for and before it was received.  Into the angry mobs and into the cruel hands of lawless man he placed himself in the great chasm, stretching out his arms to reveal divine mercy, and to bring in His Kingdom.

These Gospel miracles help prepare us today to receive Holy Communion.  Both the leper and the centurion came to Jesus in humility and with faith - these are the virtues we can know by grace that are required of us.

The words of the centurion, are used by Roman Catholics and some Anglicans before receiving Holy Communion, with the word “servant” replaced by the word “soul” – I am not worthy that you should enter under my roof, but only say the word, and my soul shall be healed.  In our liturgy we will express the same sentiment but inspired by the words of the Gentile Syrophoenician woman, we are not worthy so much as to gather up the crumbs under your table, but you are the same Lord whose property is always to have mercy...

And mirroring Jesus words to the leper, when he said, I will; be clean, after our confession, we will hear the words of assurance from Jesus that we are forgiven, in the Absolution and Comfortable Words.  And even more, as with the leper, we will be physically touched by Jesus as we receive His Body and His Blood given for us [Keble], into our mouths, and so into our hearts.

Donations:  NL75 INGB 0709 7677 49 (t.n.v. All Saints Anglican Church Amersfoort.)
(This All Saints account is designated for Ascension funds only.) 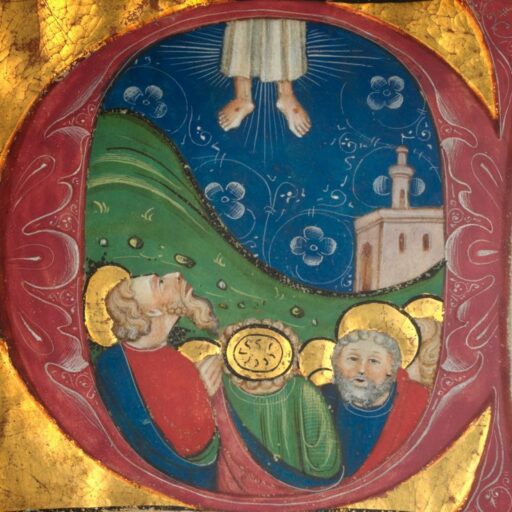 Except the Lord build the house, they labour in vain that build it: except the Lord keep the city, the watchman waketh but in vain. Psalm 127:1,2